How I decorated a baby Pirate Room for under $40

My husband and I have recently gone through the process to become foster parents. Long story short, we would love to adopt a son (we have 4 girls) and at this point in time, foster to adopt seems like the best option for us. It has been a long emotional battle so far and we are only just beginning.
So, I decided to fix up our daughter's old bedroom for a boy. One of our girls, (Zayda) has always had a DEEP love for mermaids, so I painted a mermaid on her wall a few years ago. When it came time to redecorate the room, neither Zayda nor I wanted to paint over the mermaid (even though she wasn't ever that great, she's always been kind of a manly mermaid). 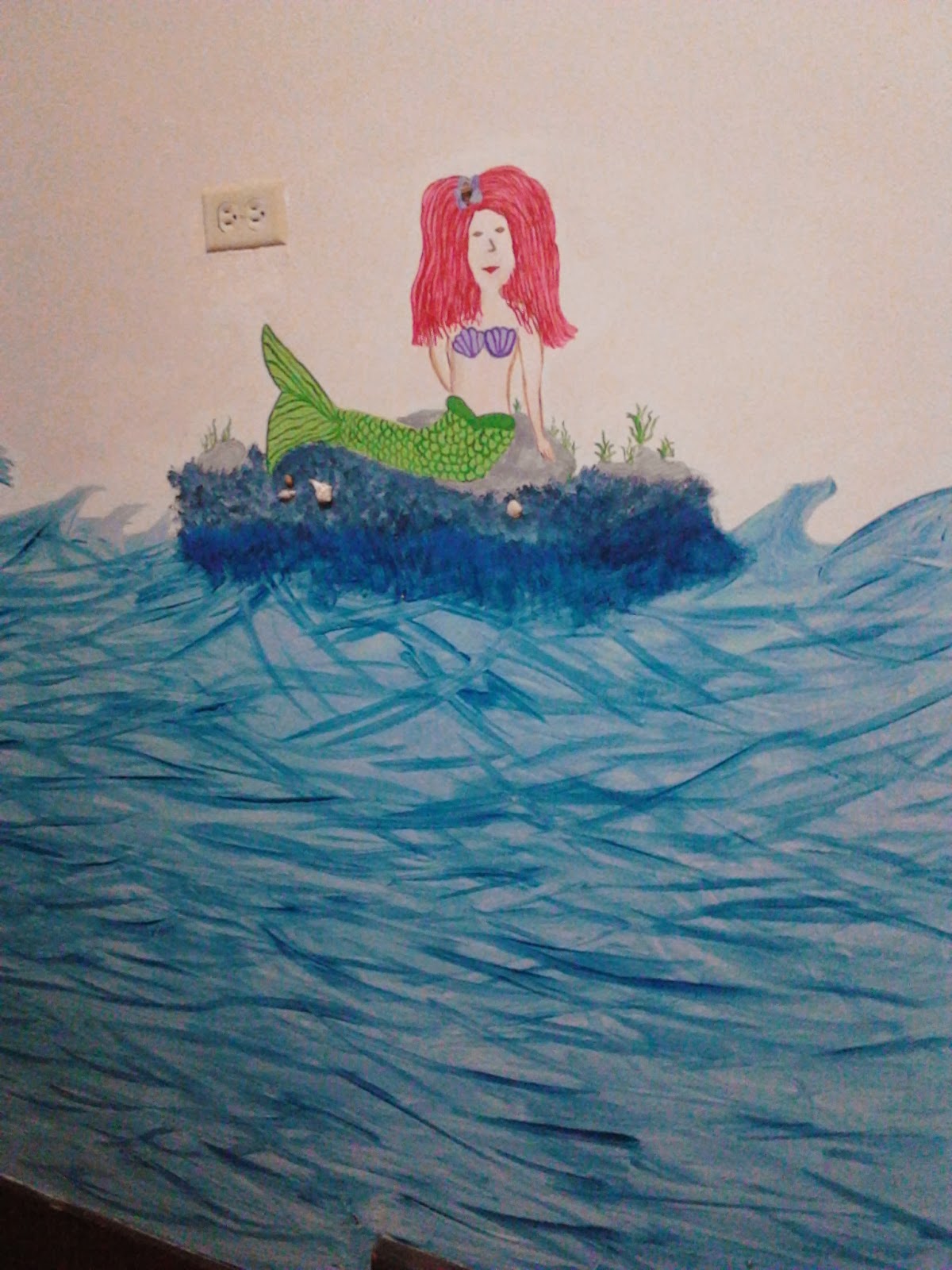 After much thought and a lot of Googleing for ideas, I decided to go with a pirate theme. I figured this way, we could keep the mermaid. (mermaids go along with pirates, right???)

The ceiling needed some work. Before we purchased our house and put a new roof on it, there had been some water damage on the ceiling due to the old leaky roof. The plaster had a few cracks and there were spots. Rather than fix this problem (like normal people), I decided to paint the ceiling like a treasure map and let the spots and cracks look like they were intentional. I used mostly folk art and apple barrel craft paint that I already had. You can find this stuff at your local walmart or craft store, it's less than $1 per bottle, I love this stuff!!


For the treasure chest on the ceiling/treasure map, I hot glued sparkly jewels and Mardi gras beads. I also included a coin that my husband brought back with him from a mission trip to Guatemala. 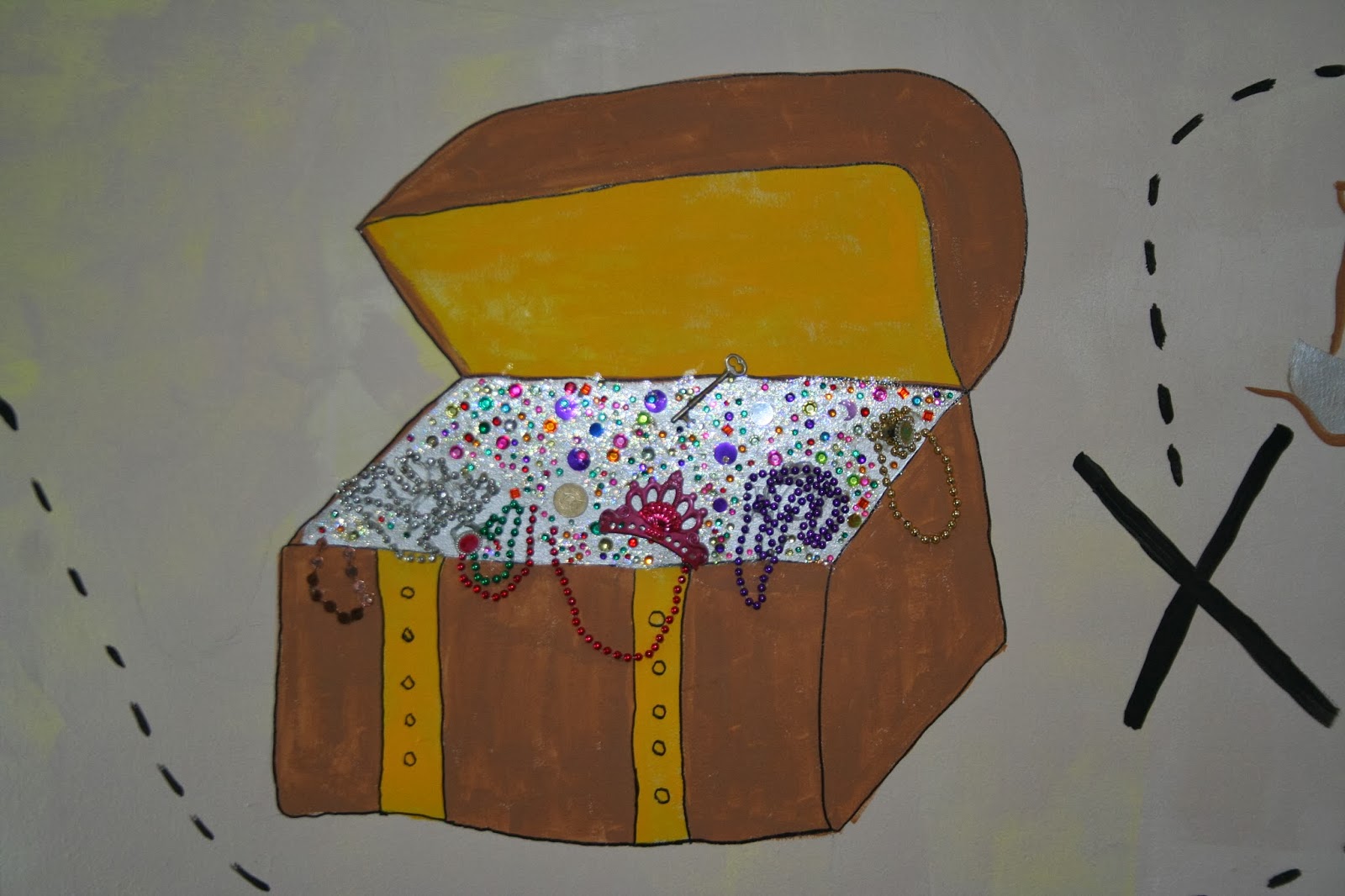 The coin is a bit symbolic for us since we made the final decision to go forth with attempting to adopt after my husband's trip (He had his heart broken by an orphan he fell in love with and wished he could bring her home).

Next, I painted water with waves around 3/4 of the room up to the mermaid on her rock that was already on the wall. This didn't cost me anything because I already had 1/2 gallon of left over blue paint my sister had given me from a room she had painted for her kids. I try and use as much left overs as possible. If you are working on a project and only need a little bit of paint, ask your friends and family. Everyone usually has left over paint after a remodel or redecorating since they always buy a little more than they need so they don't run out. I have become really good at mixing left over paint colors to achieve the shade I need. (note: make sure you aren't mixing oil based paint and water based paint together)
I also got some left over paint from my awesome Step-Mother. It happen to be almost the exact same shade that was already on the walls (what a huge blessing). This was awesome, because I needed to do some touch ups. When the bedroom was for the girls, not only had I painted the mermaid, but also I painted their names in giant colorful bubble letters.  (Thank goodness the painted covered really well) 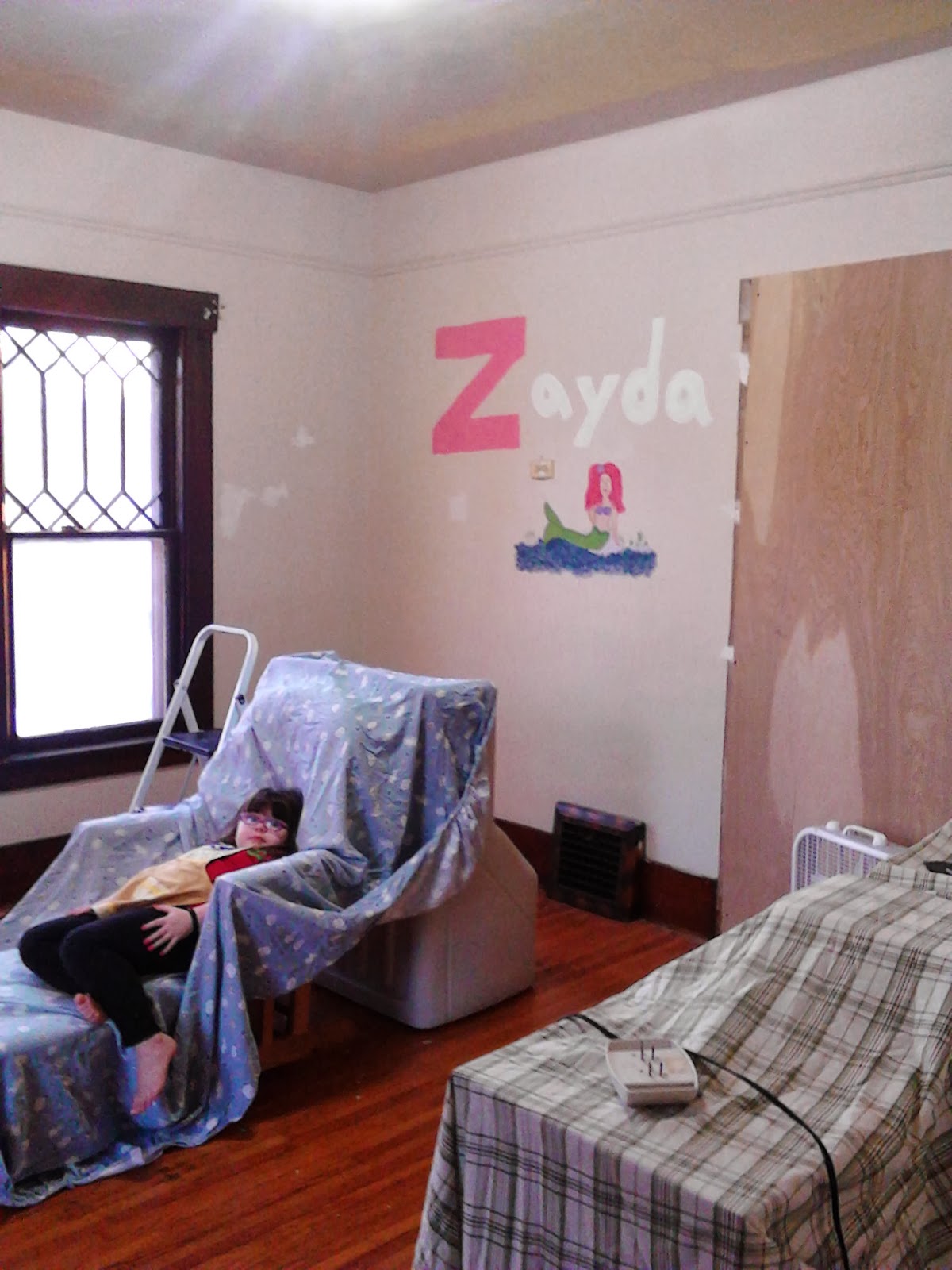 I knew I wanted to paint an actual pirate somewhere in the room, but I wasn't very confident in my own skills to just slap one up (after all I am the one who painted the mermaid drag queen).  So, I Googled free printable pirate coloring pictures. I found this guy http://www.grandparents.com/grandkids/coloring-pages/mr-pirate and decided to project him onto the wall and then paint him.
If you happen to have transparencies, you can print directly onto them and you are ready to go. I didn't have any (and you know me, I'm too cheap to buy any). I printed on regular paper and then traced the image onto a clear page protector with a sharpie. Bam, I was ready to project my pirate. I think he turned out pretty cute. 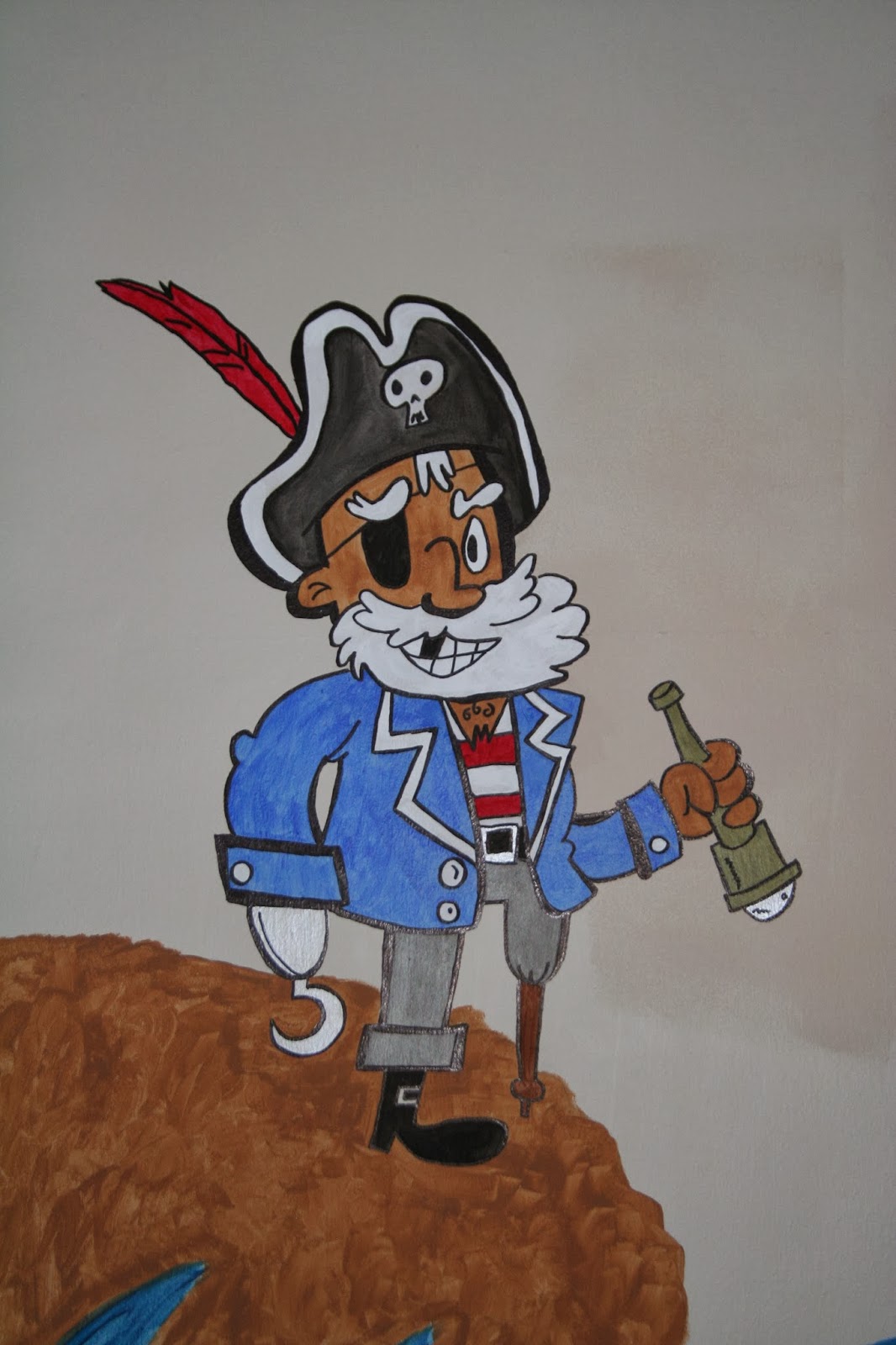 The last wall of the bedroom, I decided to paint with large red and white stripes. This sounded very pirate-like to me (maybe I'm crazy). This is where most of my money came in since I had to actually go and purchase this paint. I had enough painters tape to make three lines on the wall before I ran out. Pooh! I was too anxious to finish so I had to improvise. I tied some blocks to the end of a long piece of yarn and made my own plum bob. I have no idea if that is the actual word for such a contraption. I would tell you all about how this great idea worked, but it would take awhile ( I will save that for another post). Also on this wall, and all the way around the room, there is a skinny decorative trim. This trim is around most of the walls in our house and when we moved in was painted the same color as the walls. I chose to paint the trim in this room black. I think with a contrasting color that high up, it helps to make the room look bigger, because it draws your eyes upward to the ceiling. 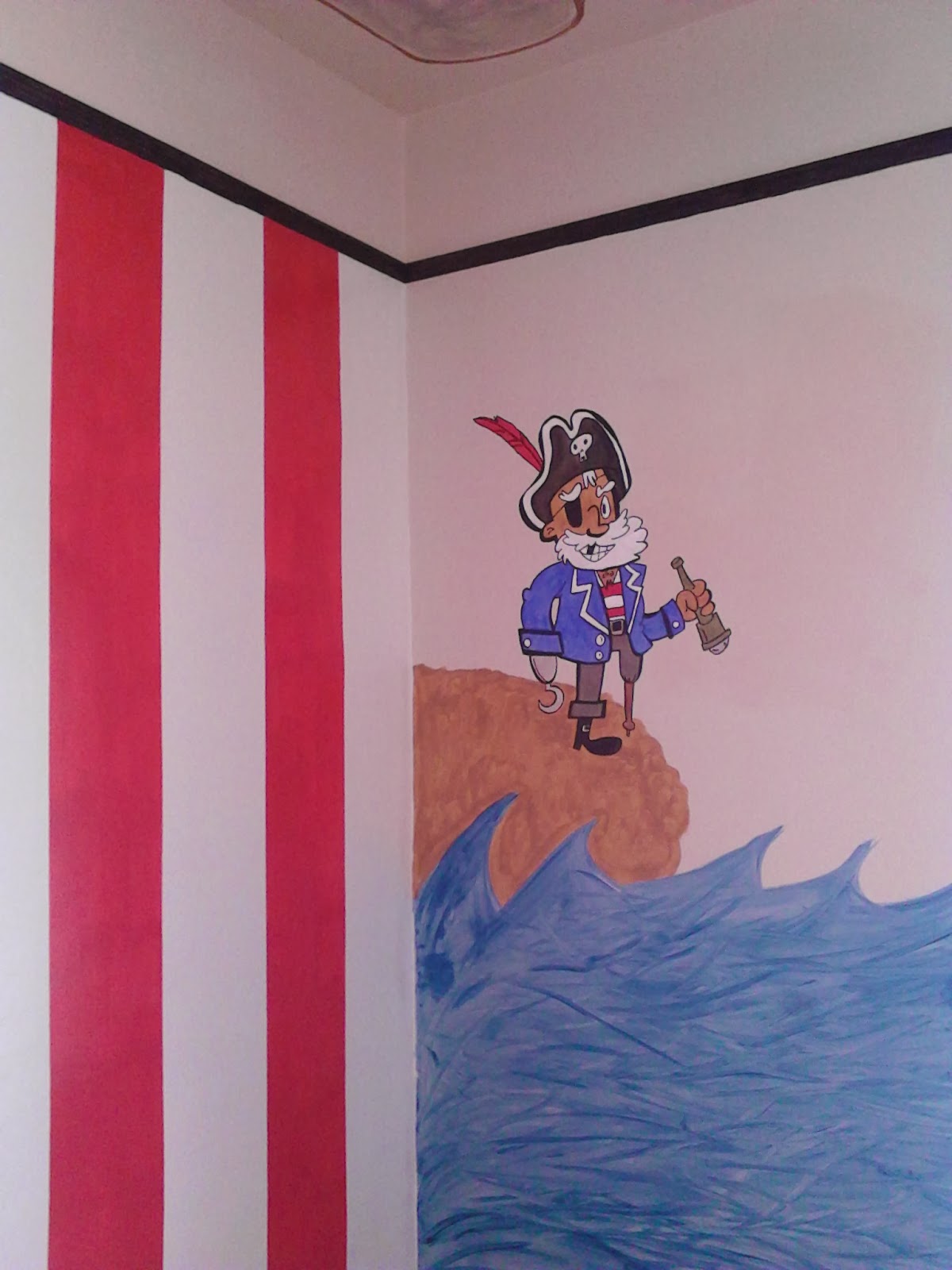 After all that painting, my arm muscles were not very happy with me, So my Mom came over and finished the last corner. She is such a happy painter. I think if her hair were a little bit puffier, people would mistake her for Bob Ross. She does an awesome job! 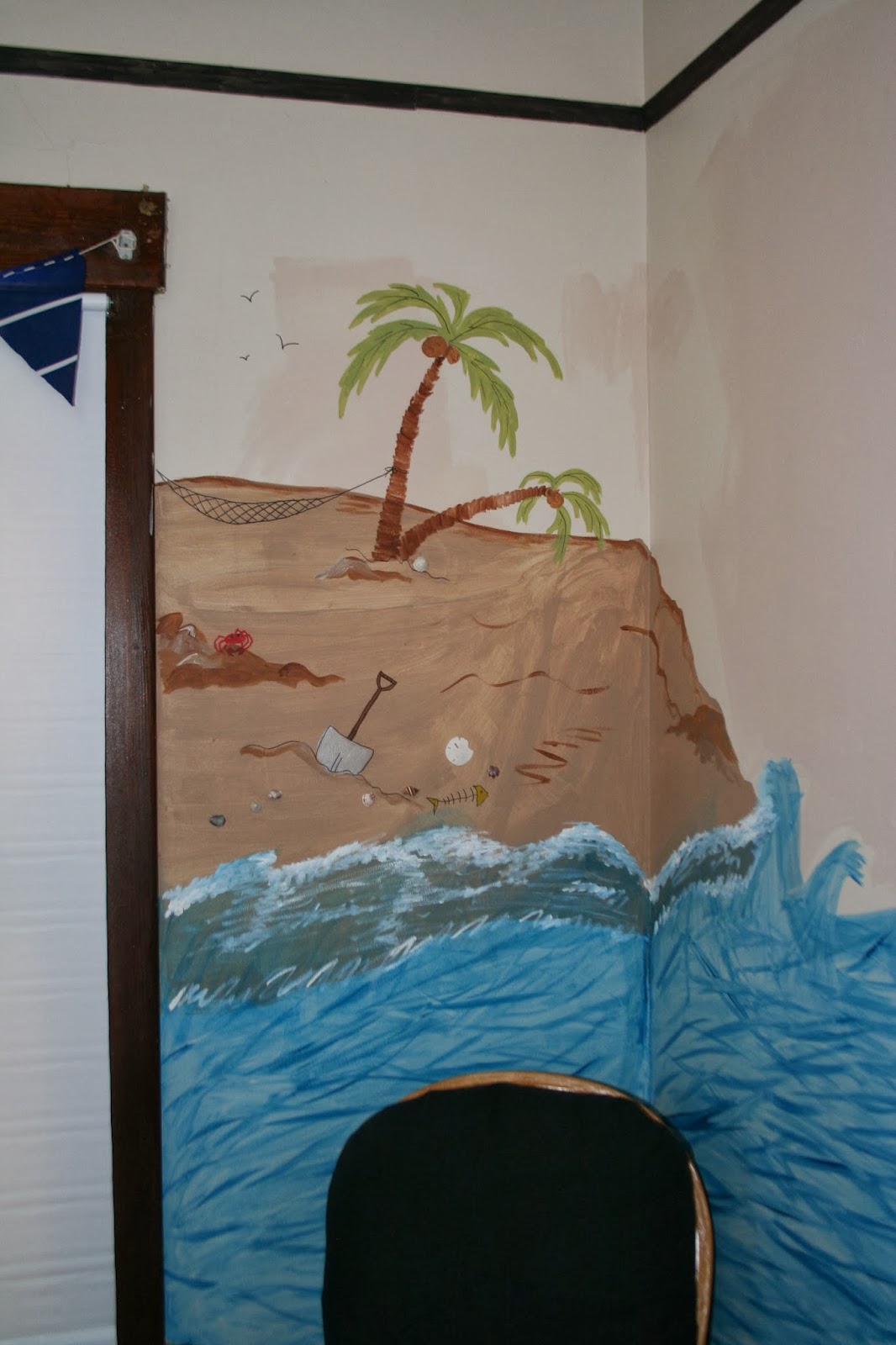 Since the walls were all finished, I needed to tackle the window coverings. The room originally had pull down shades. I am not usually a fan of pull down shades, but since this is a baby's room, I went with it. I knew mini blinds are not baby friendly and I needed something to block the sun from streaming into the baby's face while it was sleeping during the day (because we all know babies don't actually sleep at night). My only problem with one blind was that it had a hole in it. Sooo, instead of buying a new one, I fixed it with a little duct tape. 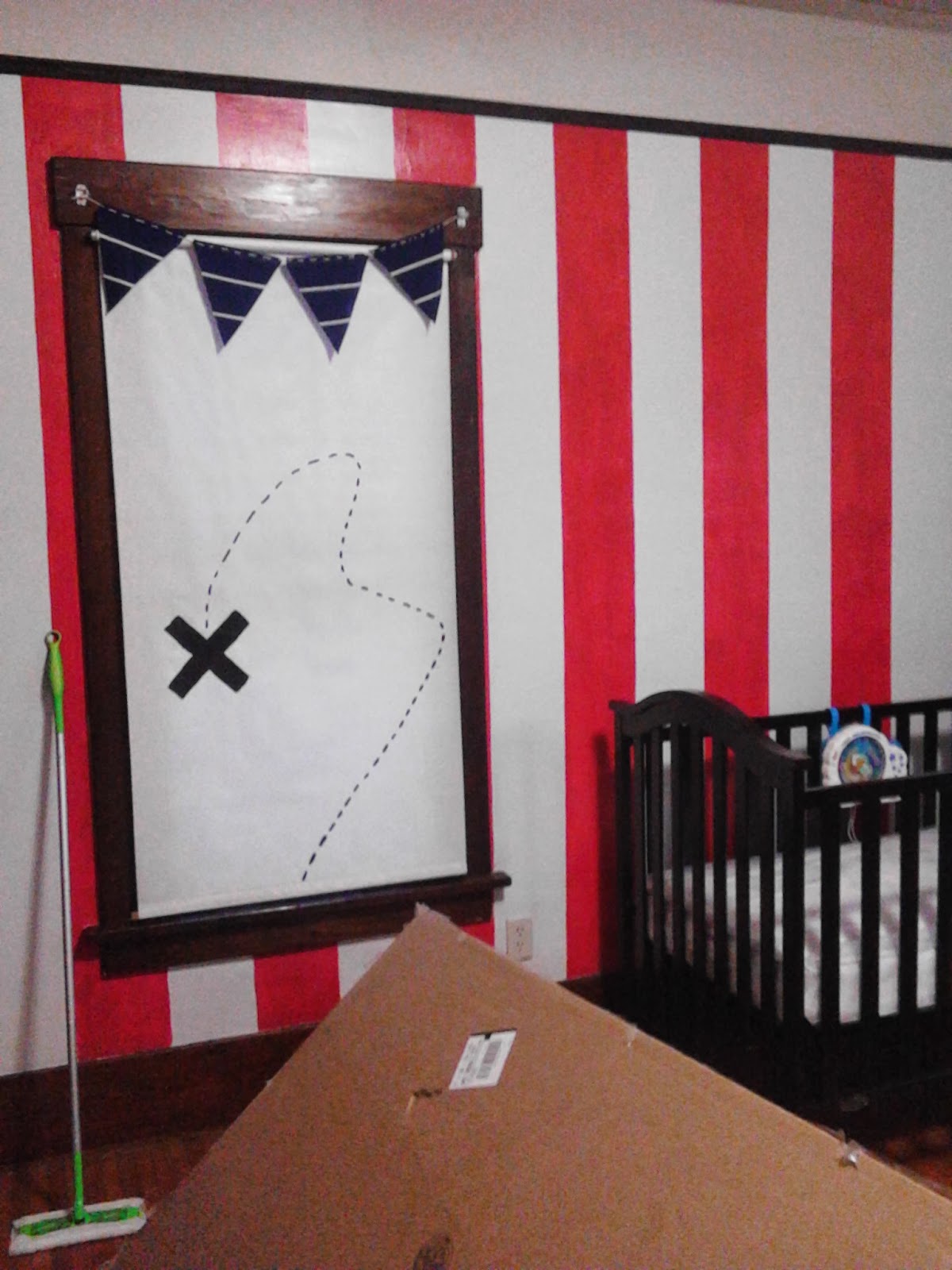 For the tops of the windows, I cut triangles from some old double knit material from what I still have left of my Grandmother's stash. I used some white cotton yarn and sewed them together and wrapped them around the existing hooks from previous curtains.

When Zayda was a baby we purchased a rocking/glider and footstool. They were a pale green color, which seemed like a good idea at the time of purchase. A couple toddlers with chocolate cookies later and the chair looked like trash. I tried washing and scrubbing, but it was to far gone. I kept it forever thinking that I would have it recovered. I had some black material left over (again from one of my Grandmothers). I made simple slip covers by laying the pieces down, cutting around them , leaving a little extra for seam allowances. 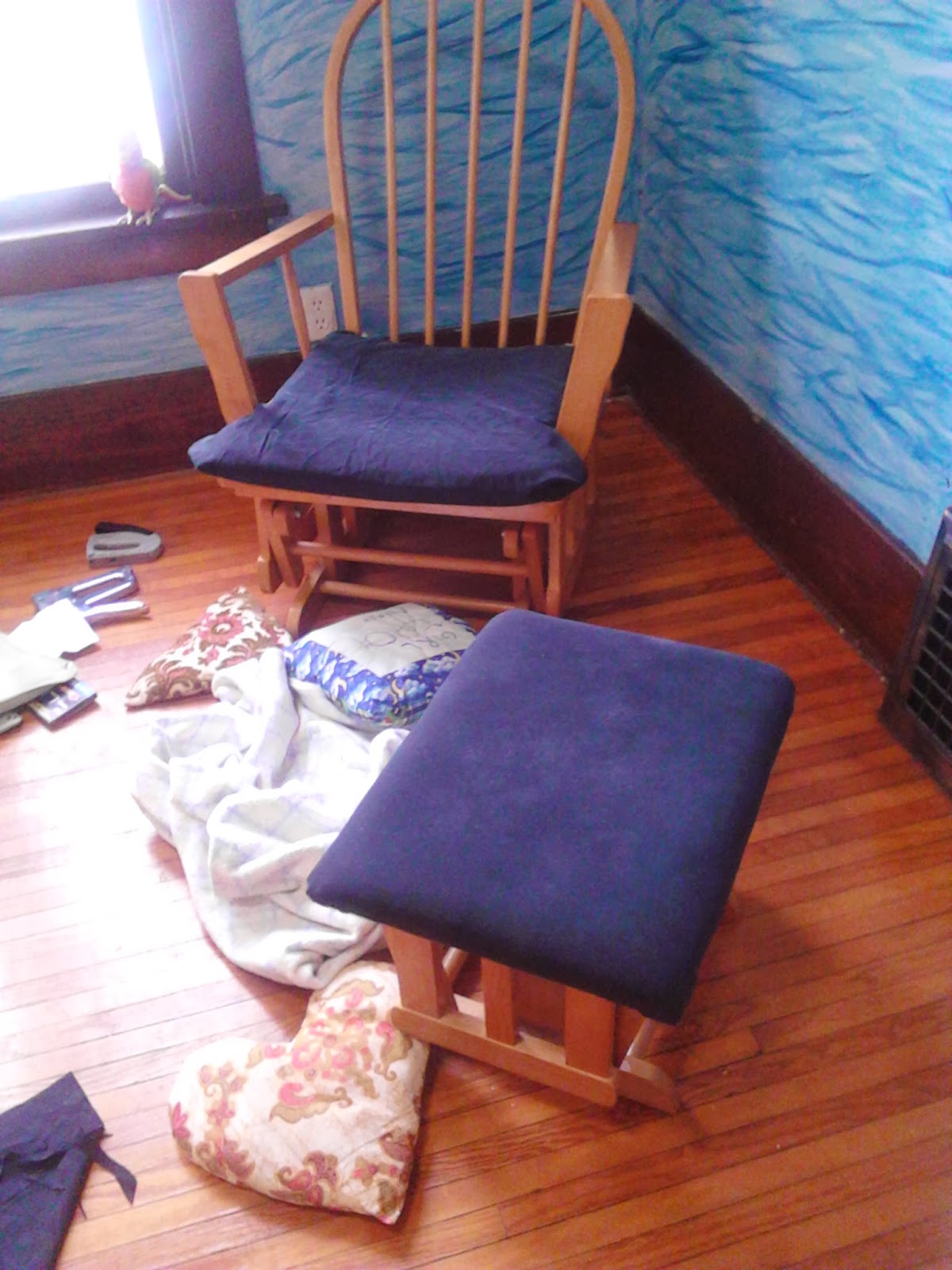 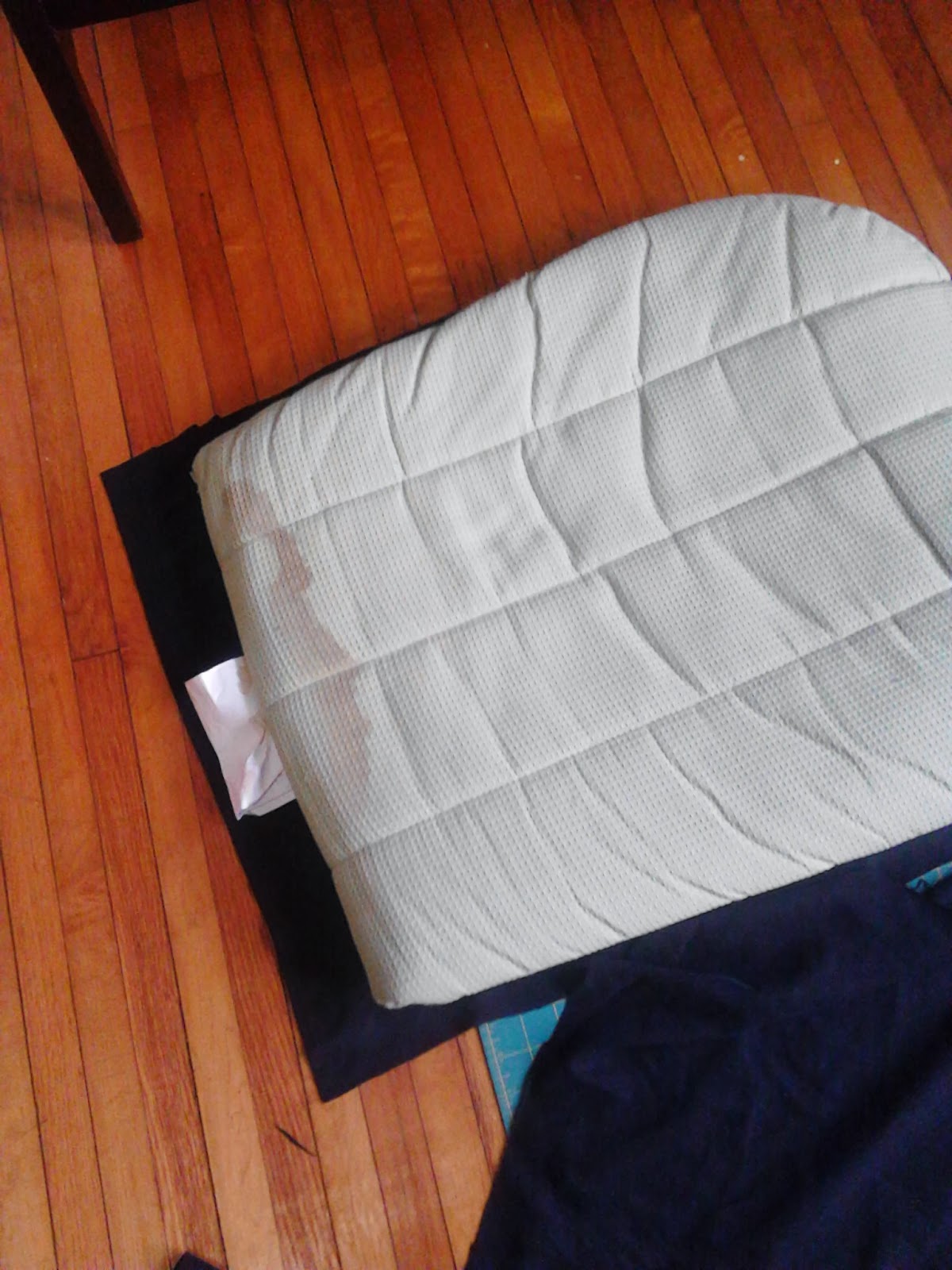 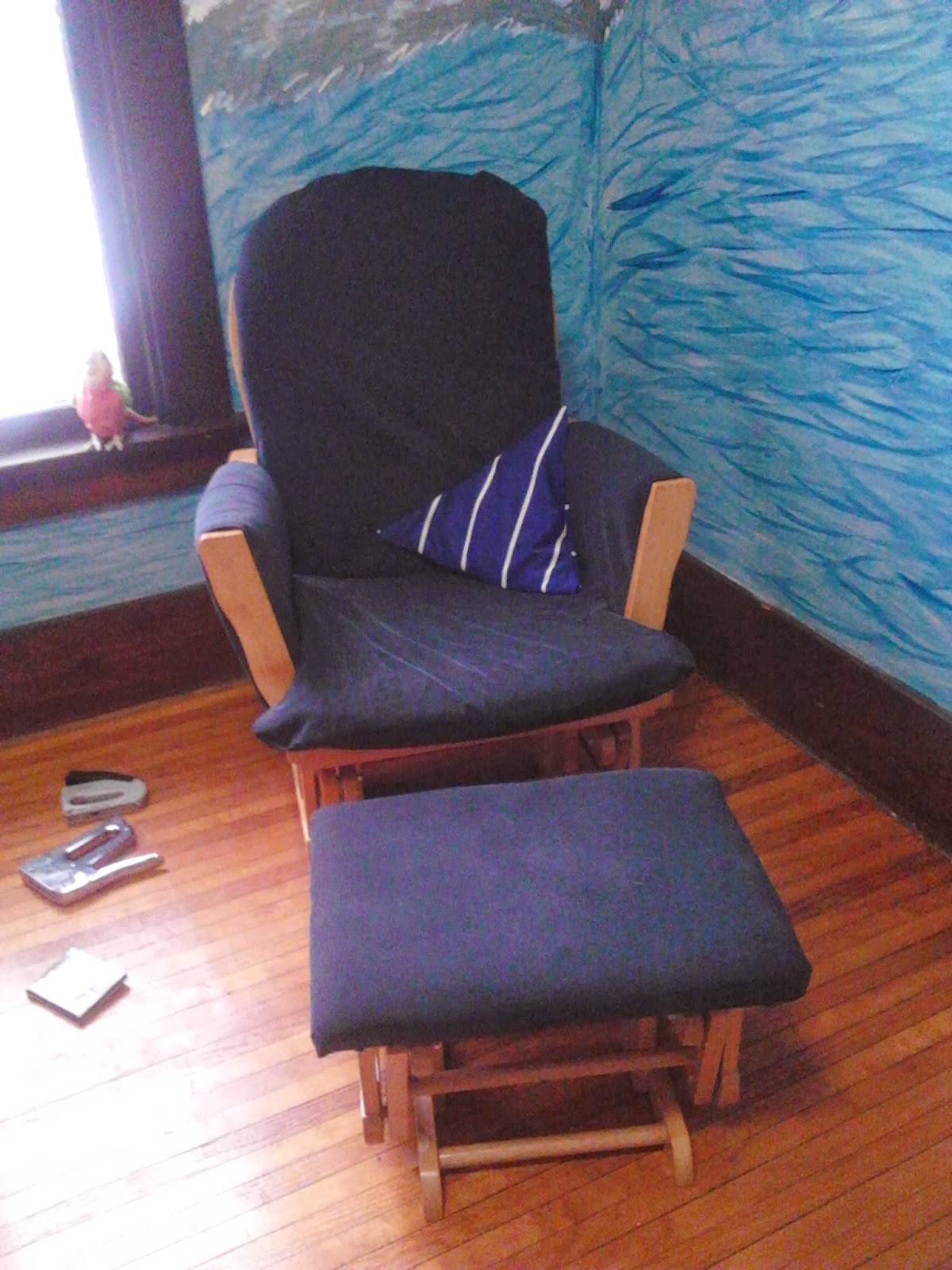 Since I am a hoarder and nostalgic for strange things, I kept this (and several more) really ugly pillow that my grandmother had made for her couch (probably some time in the 70's). 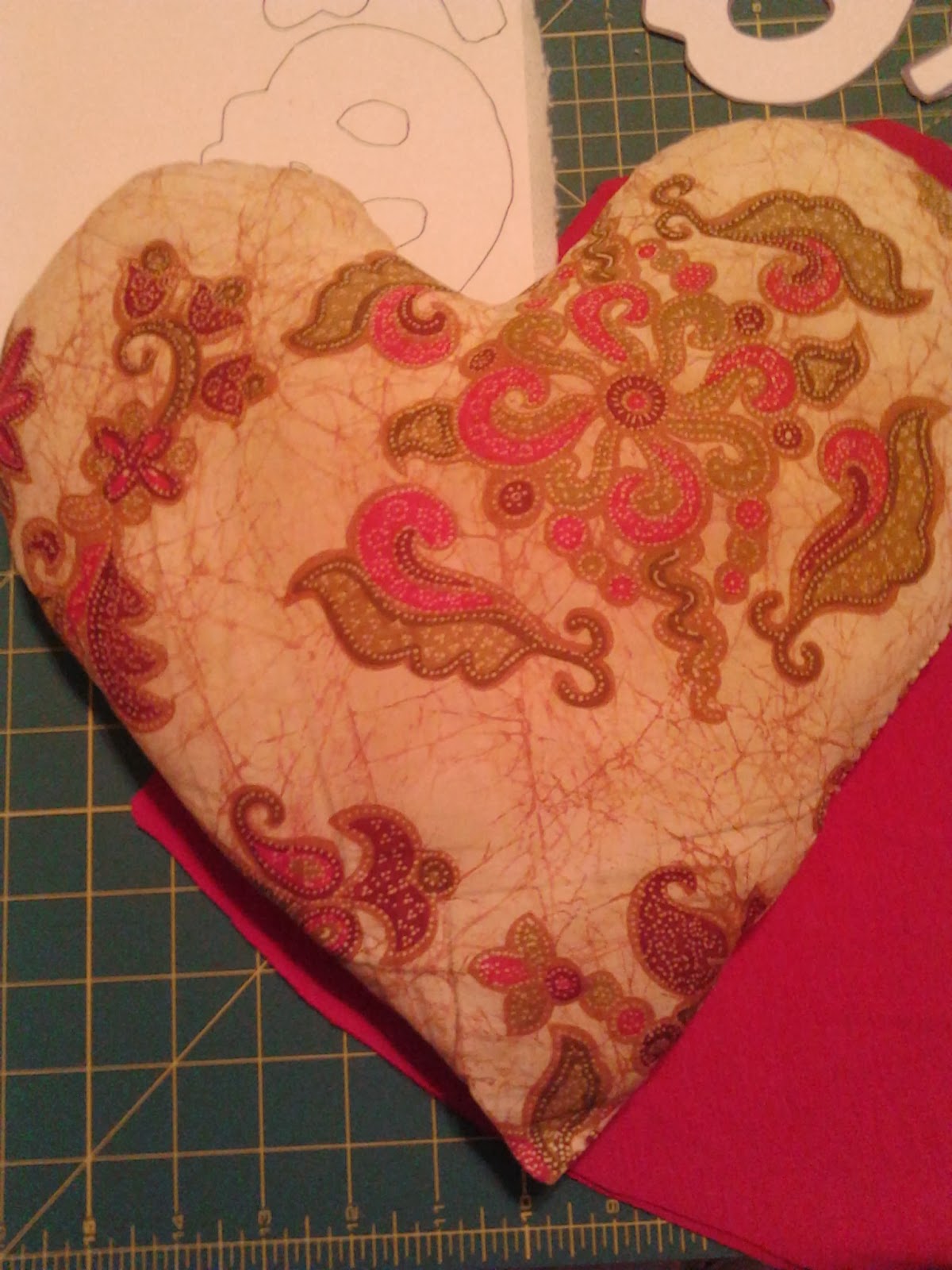 I felt like the plain black chair needed a little color, but heart pillows in a boy's room seemed a little cheesy. Heart pillows in ANY room seem a little cheesy. So I recovered it with a skull and cross bones. I'm not usually the skeleton type, but a pirate bedroom kind of calls for it. I used a free printed coloring page again and  iron on wonderunder. If don't know about the greatness of Wonderunder, you should google it, it is one seriously awesome invention. 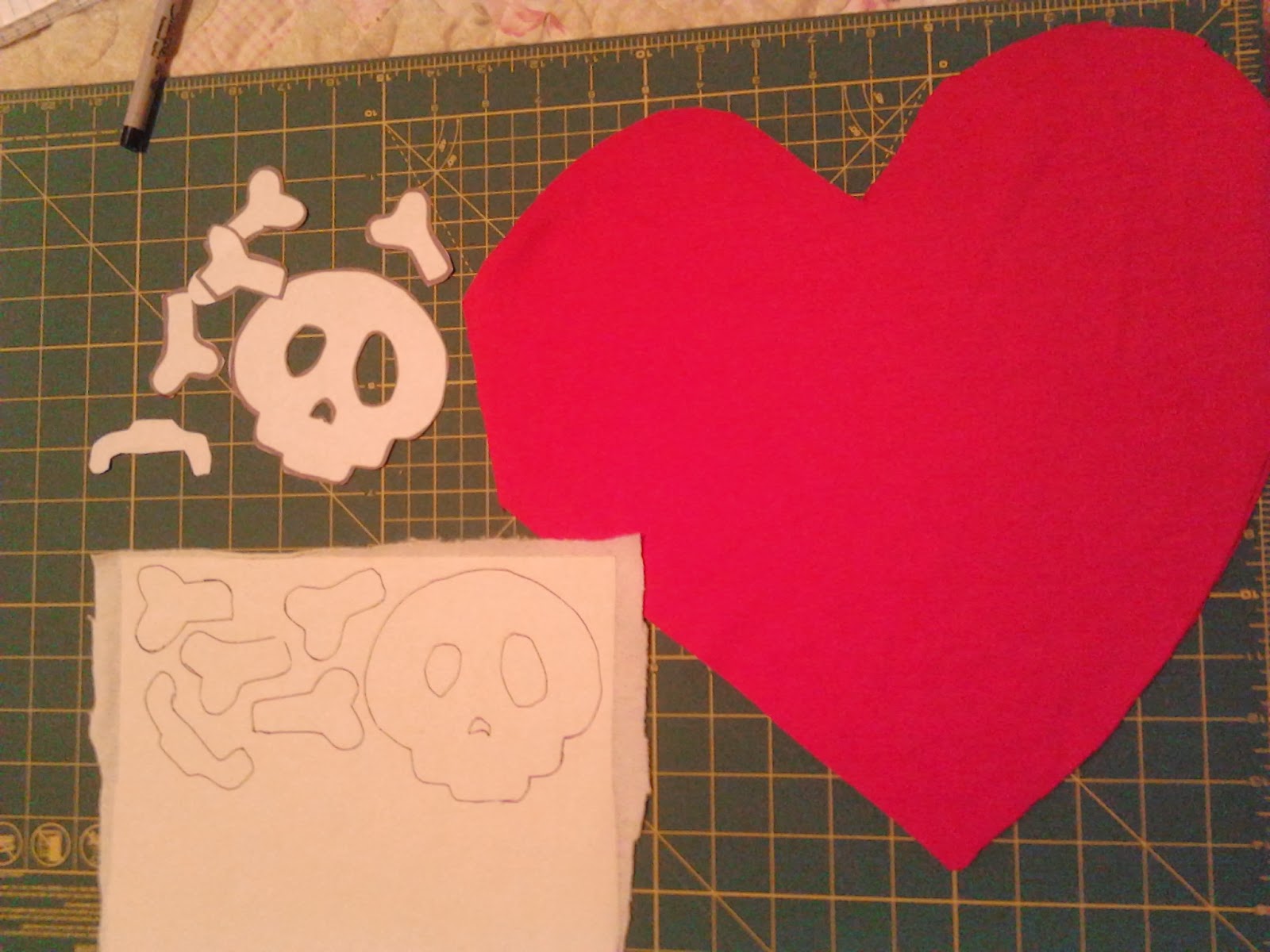 I also recovered a triangle pillow with the same material that I used to make the window covers.

The last little pirate part of the room was the baby mobile. I purchased a mobile from a second hand store for $2. It was cute, but didn't match the theme. I took it apart and made my own pirate pieces instead. 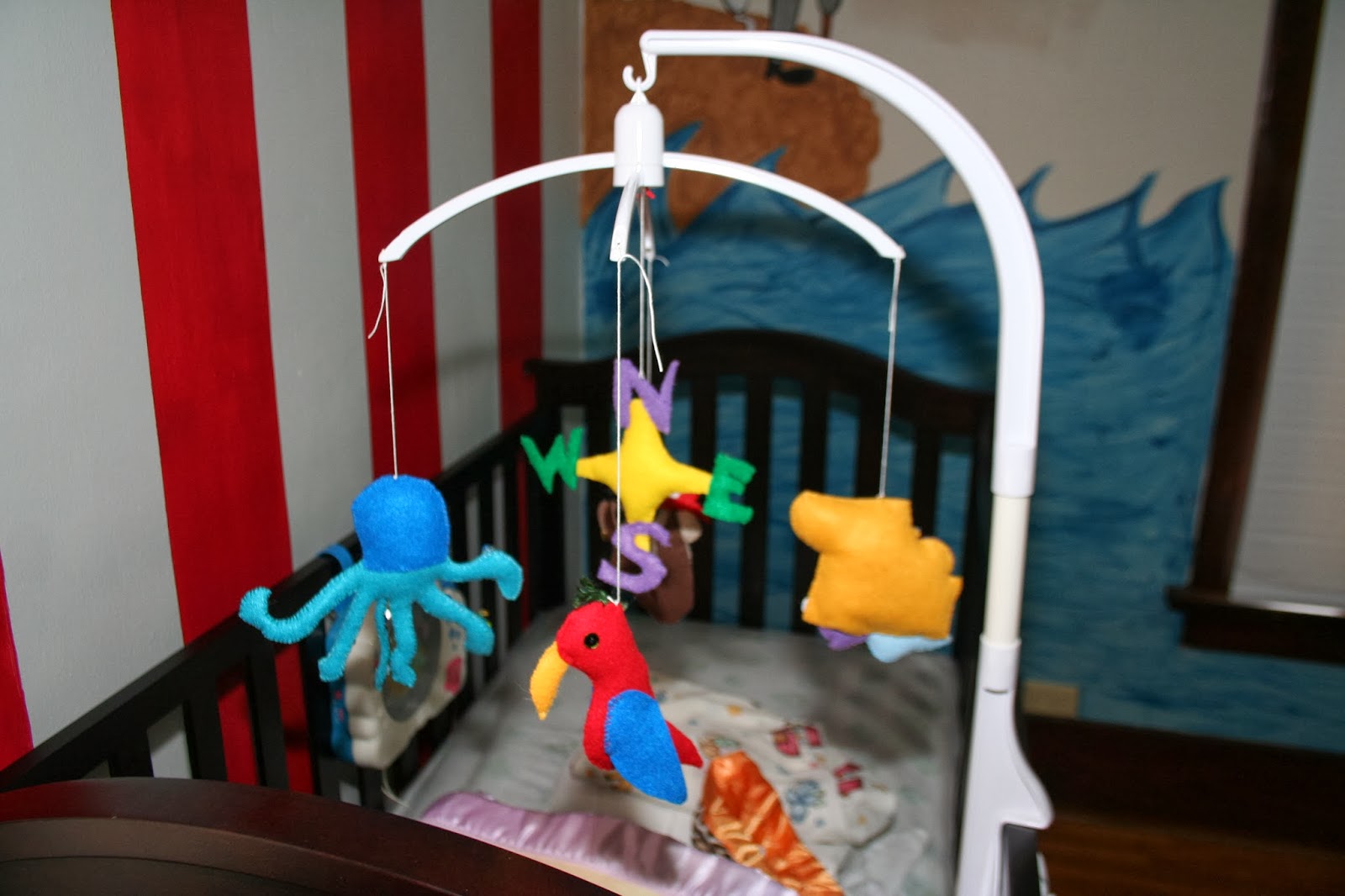 I just cut pieces of felt and sewed them together with some beads and sequins. I completely fell in love with felt work after this project. There will be more felt work projects in my future for sure!

I guess we are all ready for a baby now. As ready as we will ever be.  We are very anxiously awaiting the call from a social working saying that she has a baby who needs us just as much as we need him.
So for now, I pray that God gives us this chance.

Posted by eleciascreativei at 11:32 AM

Email ThisBlogThis!Share to TwitterShare to FacebookShare to Pinterest
Labels: Stuff you didn't really need to know