The shirt off his back

My husband loves to shop more than any straight man that I have ever met in my life. This is not a bad thing! We love to go on shopping trips together and if we had more money we would do it a lot more often. As I mentioned before in the famous UNDERWEAR post, He has clothing issues. He can't stand to wear socks, underwear, or t-shirts very many times without buying new. I on the other hand am a bit of a slob. I am currently wearing his sock cast offs, jeans with a hole in the thigh, and a t-shirt sporting the Bible school theme from three summers ago(In my defense, I am just at home with my girls, and they don't judge me based on my clothes).
So, anyway, my mans clothing quirks seem to work out great for my crafts. He is a nurse at our local Emergency Room hospital, so he wears scrubs all the time. He insists on wearing white t-shirts under his scrubs so his manly chest hair doesn't hang out, which is a good thing because nobody wants a nurse who looks like he just came from the 1985 cast of Magnum P.I. Like most of his clothes, he won't wear them very many times before he says they aren't as white as the day he bought them, and therefore clearly unwearable.
I happened to have an idea for a star shaped rag rug, so I cut up some of his white shirts, found some red and blue scrap material from my mother's giant hoard and here is the result: 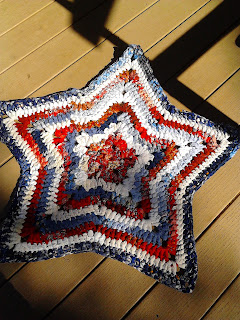 I started out using a pattern for a star shaped afghanhttp://www.angelfire.com/va3/heartfeltangels/littlestarafghan.html, but that didn't seem to want to lay flat nicely as a rug. I changed it up a bit after a few rounds.

If I would have been thinking clearly (which almost never happens), then I would have written out my own pattern. I am going to try and work one out soon.
Posted by eleciascreativei at 5:24 PM

Email ThisBlogThis!Share to TwitterShare to FacebookShare to Pinterest
Labels: Crochet