When I was a child, I was a Girl Scout and we held an annual Father/Daughter Banquet. I still have a picture of my father, my sister, and I at this event. I wish I could include it in this post, but at this current time I can't find it.(If you could see my house right now, you would understand)
When I started leading my daughter's troop three years ago, I knew this was something we had to do. So, last month I was the chairmen of an area Girl Scout He & Me dance. He & Me is the new correct way to say Father/Daughter, since sadly many girls don't have a father around, and we don't want to leave anyone out. We hired a D.J. to come and play music for us and decorated our local community center. Towards the end of the night we drew a name from a hat and crowned one little Girl Scout the Princess of the ball. They all had a wonderful evening with their dads (uncles, grandpas, etc.) 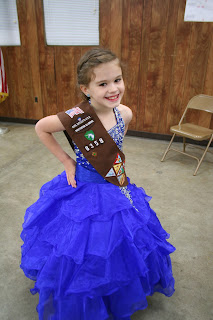 I decided to make cupcakes for the dance, and of course I like to be a little fancy with my food. I had watched an episode of D.C. Cupcakes were they used a grid to decorate the cupcakes like a picture of the entire world. Each square of the grid equals one cupcake and together all the cupcakes form a picture.
I printed out the Girl Scout logo from my computer and drew a graph across it so that I had 120 squares since I wanted to make 120 cupcakes for the night. 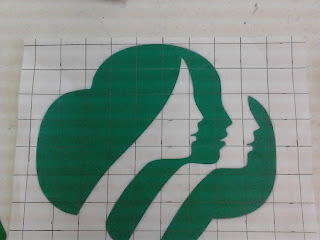 I made the cupcakes at home and iced them all in white (well mostly all of them, I left a few plain because I knew they would need to be all green anyway).
I took the cupcakes to the dance early that day while I was decorating. I went ahead and placed them on the table where they would stay and decorated them there. (I had no way of transporting them in the correct order since there were so many)
I just looked at my grid and piped the green icing on each cupcake according to it's square on the picture. It was pretty easy!

Posted by eleciascreativei at 10:05 PM